GBB has been thanked this month for helping to convict four fraudsters involved in a large fraud scam.

The four Defendants were imprisoned for the charge of ‘Conspiracy To Commit Fraud By False Representation’ (for seven years, three years, 20 months and 15 months respectively), due to the evidence given by a GBB expert. Two of the four convicted were also ordered to pay in excess of £8000 each.

Of the expert’s evidence, Mel Elliott, Witness Care Officer for the CJS Durham Witness Care Unit, said: “Your evidence was very important in bringing this case to justice and your contribution is greatly appreciated.”

The case, dating back to 2009, involved an Audi emerging from a side road and allegedly colliding with the nearside of a correctly proceeding BMW, causing the latter vehicle to be pushed down an embankment and roll over three times before coming to rest.

The engineer provided a report in regards to the collision damage after having examined photographs of the vehicles involved. In June 2012, he was asked to attend Newcastle Crown Court to give oral evidence based on his findings.

He found that the force direction to cause the damage seen to the Audi’s chassis leg and nearside inner wing was incompatible with the direction of approach for the BMW. The damage suggested the force applied was from the front nearside to the offside, rather than a vehicle passing the front of the Audi. 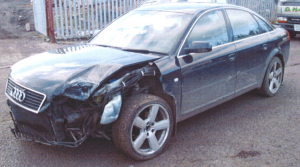 There was damage to various panels on the BMW. The damage to the nearside of the vehicle – reportedly the side that the Audi struck – was higher than any of the components on the Audi. The offside also displayed damage. This was again higher than the Audi’s components. The marks and the profile of the damage indicated that the BMW was stationary. 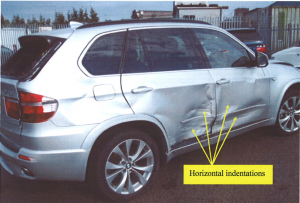 If the BMW had rolled over as alleged, it would display damage to all of its panels. The engineer determined that only some of the panels on the BMW were damaged. Others remained unmarked. There was also no grass or soil in the wheels as would be expected had the vehicle gone down an embankment and rolled over, and the air bags had not deployed.

Evidence given by GBB experts is regularly acknowledged and has led to many cases being dismissed or withdrawn, or guilty parties being convicted.